Directions
1 tablet daily, unless otherwise advised. The tablets can be chewed or swallowed whole. Preferably before bedtime.
2 tablets per day for children up to 6 years, pregnant women, lactating women and people above 60 years of age.
Do not exceed the recommended daily dosage.

Dietary supplements should not replace a varied diet.
A healthy lifestyle and a varied balanced diet are important for maintaining good health.

Bio-Calcium+D3+K1+K2 tablets contain important nutrients for the bones. The combination of calcium, vitamin D3 and vitamin K1/K2 help the maintenance of normal bones. The calcium is ionised in the stomach, and the calcium ions are absorbed in the intestine with help from the vitamin D3. Vitamin K is absorbed in the small intestine where it helps maintaining healthy bone and is also part of the ability of the blood to coagulate. Bio-Calcium+D3+K1+K2 is also suitable as a chewable tablet.

When taking two tablets daily, divide them out on two meals.

Calcium is an element and also the most abundant mineral in the human body. The most prominent function of calcium is its need in the maintenance of normal teeth and bones. Bone tissue also functions as the body's calcium storage facility. If the body gets too little calcium, it breaks down calcium from bone tissue to cover its needs.

The percent of the body's calcium which is not channeled into teeth and bones supports different body functions. For instance, calcium contributes to:

The bones consist of living tissue that is constantly being replaced. The bone-forming cells are called osteoblasts and the bone-degrading cells are called osteoclasts. As bone tissue also functions as the body's calcium storage facility., it is particularly important that we absorb sufficient calcium in the bones. If the body gets too little calcium, the osteoclasts are activated which breaks down bone tissue to cover the body's need for calcium.

It is important that you get enough calcium, vitamin D and vitamin K during the years when your bones are developing. Children and young people increase their bone mass because the osteoblasts are more active than osteoclasts up to the point where the bones reach their peak mass (usually around the age of 30 years). It's been called “building a bone bank.” After reaching this peak mass the amount of calcium lost from the bones will exceed the amount stored, causing a net loss of bone mass (about 0.6% per year). Although it is a slow and gradual loss, you will benefit from a high "peak bone mass" as possible right from the beginning of this age-related loss of bone mass.

In addition, women suffer more from a hormone-related loss of bone mass from the beginning of their menopause. As a consequence their total annual loss of bone mass can be as much as six per cent when their ovaries stop producing hormones.

Men's loss of bone mass is generally only one-half of that of women.

As shown in the following illustration, women are more exposed to loss of bone mass than men. Research shows that women who are treated with estrogen are not necessarily in less need of calcium. 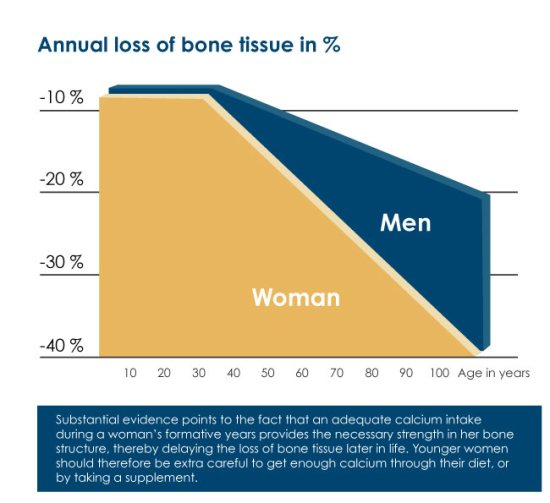 Where do we get calcium?

Vitamin D is a fat-soluble vitamin that is available in several forms, of which D2 and D3 are the most important. D3 is the form of vitamin D that is absorbed most easily in the body. Vitamin D is in fact a pro-vitamin, as we are able to synthesize it in our skin when we get exposed to sufficient amounts of sunshine. However, at latitudes similar to Scandinavia the Sun is only high enough in the sky for us to produce vitamin D from may to september. Vitamin D is necessary for the body to metabolize calcium and for the function of bones and muscles. 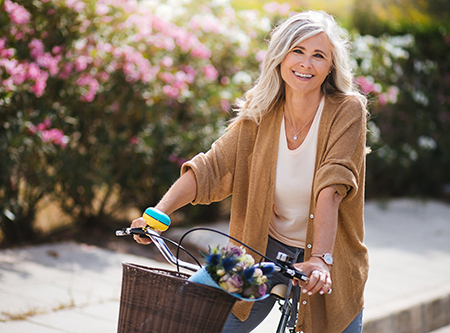 In recent years, science has focused on our need for vitamin D. Health authorities recommend Vitamin D supplements to children, pregnant women, dark-skinned children/adults, veiled women (and others who wear garments that cover most of the body), and to individuals who rarely or never get exposed to sunlight. In addition, nursing home residents and people over the age of 70 are advised to take vitamin D as a means of protection against brittle bones.

Calcium with vitamin D is necessary for normal bone formation in children.

What is vitamin K?

A natural source of vitamin K1 are dark green vegetables. Vitamin K2 is produced by our intestinal bacteria. These bacteria can also transform K1 to different variants of K2. Infants can not form vitamin K. We usually get equal amounts of K1 and K2.

The European Food Safety Authority (EFSA) has evaluated the evidence behind calcium, vitamin D, and vitamin K and has acknowledged the following claims:

Bio-Magnesium: Magnesium is included together with calcium in bone and tooth tissue and also contributes to normal muscle function.