Dietary supplements should not replace a varied diet.
A healthy lifestyle and a varied diet are important for maintaining good health.

Pregnant and lactating women and those on medication should consult their healthcare professional before using the supplement.

Suitable for vegans and vegetarians. 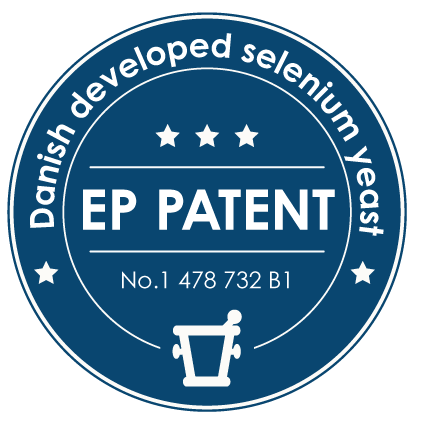 SelonoPrecise are small, round white tables each containing 100 micrograms of selenium from Pharma Nord's patented, standardized selenium yeast. Besides selenomethionine SelenoPrecise contains more than 20 other organic selenium compounds. SelenoPrecise has documentation for its very high level of bio-availability and stable quality:

SelenoPrecise as an Active Pharmaceutical Ingredient

Pharma Nord is currently the only manufacturer in the world that is approved to manufacture organic pharmaceutical-grade selenium yeast. This unique, patented medical raw material is used in Denmark under the name SelenoPrecise and is indicated for preventing and treating selenium deficiency. All Pharma Nord's dietary supplements with selenium contain SelenoPrecise.

SelenoPrecise API (Active Pharmaceutical Ingredient)
SelenoPrecise includes many different selenium species, each of which has been shown to have different functions in our body. By supplying the body with a wide range of selenium species, it is possible to emulate the natural selenium variation found in a versatile diet. This means that the different selenium compounds can follow different biological pathways in the body and remain in the blood for varying periods of time. This is believed to have the greatest health benefit. Among the advantages seen with organically bound selenium species from selenium yeast are higher absorption and bioavailability than what you see with inorganic selenium forms and synthetically produced selenomethionine.

The challenge: homogeneity
It is a challenging task to produce a homogeneous selenium yeast, which means that the selenium content in tablets taken from any production batch is always the same. If the deviations fall outside a very tight limit, the selenium raw material does not qualify for medical purposes. The tolerated deviation in declared and actual selenium content is extremely small. Also, the content of different selenium species from batch to batch must be within very narrow margins. It all makes sense because it is only fair that consumers expect the exact same effect with every tablet they take. The goes for scientists who use SelenoPrecise for research purposes.
Pharma Nord's selenium yeast contains more than 20 different selenium species, the content of organic selenomethionine is stable at 67%, and the proportion of inorganic selenium never exceeds 1% of the total selenium content.

Summary
There are distinct advantages associated with taking API selenium yeast compared with other selenium forms.
It is organic. The selenium content stays longer in the body than inorganic selenium and it also remains active longer before it is washed out
It contains more than 20 different selenium compounds found in nature in a selenium-rich diet.
It has a very small variation in the amount of its various selenium compounds.
You get the same effect from tablet to tablet as with medical preparations.
It has given the best results in scientific studies.
* EP Patent No. 1 478 732 B1.

Selenium is an essential trace element that supports an array of selenoproteins and selenium-dependent enzymes that are important for human health and well-being. One of these enzymes is glutathione peroxidase (GSH-Px), which has several important functions in the body. In addition, selenium supports a normal thyroid function. The thyroid function is important for keeping the metabolic rate in balance. Furthermore, selenium supports biological processes such as:

The ability of selenium to bind to heavy metals
In the body, selenium binds to different heavy metals and forms insoluble compounds that are eventually discharged from the body. This process consumes some of the available selenium, leaving less for other important selenium-dependent processes*. Studies show that selenium binds mercury in a 1:1 ratio. When mercury and selenium bind, they form a chemically inert compound called mercury selenide, which is harmless to the body. However, the selenium that reacts with mercury is no longer available to selenoproteins that depend on the trace element. Insufficient selenoprotein synthesis can have a number of negative effects.
* Schrauzer GN Selenium and selenium-antagonistic elements in nutritional cancer prevention. Crit Rev Biotechnol. 2009;29(1):10-7.

What foods contain selenium?
Selenium is found in such things as fish, nuts, and whole-grain. People who do not consume these food items regularly may benefit from taking a selenium supplement to be on the safe side. The recommended daily allowance (RDA) for selenium is around 50-70 μg (it differs from country to country). Men generally need a little more selenium than women do.

Organically bound selenium has higher absorption
The selenium in the agricultural soil is inorganic. Once it gets absorbed by plants and ends up in animals who feed off the crops, it is converted into organic selenium. The selenium we get from our diet can be bound to amino acids such as methionine and cysteine. In contrast, selenium in supplements can either be organic or inorganic. It is known that organic selenium compounds are easier for the body to absorb and incorporate in the different selenium-dependent enzymes and selenoproteins.

Selenium is many things
Selenium is a trace element and a mineral that is found in the soil in varying amounts. A country like the United States has a fairly high selenium content in the soil, while it is relatively low in most European countries. Grain and other plants absorb selenium from the soil. Therefore, the diet's selenium content depends on the amount of selenium in the agricultural soil.

Organic and inorganic selenium
It is important to pay attention to the different types of selenium when choosing supplements.

Selenium yeast
Selenium yeast originates from yeast cells that are grown in a selenium-containing nutrient substrate. It provides a high content of naturally occurring organic L-selenomethionine. The selenium yeast also contains methylselenocysteine as well as a variety of other organic selenium compounds that emulate the natural selenium variety that you get from a balanced diet. According to scientific studies, this broad scope of different selenium types is important. Before the selenium yeast is made into tablets it is inactivated by heat and turned into a powder, from which point it functions as a selenium- and protein-rich nutrient.

Selenium yeast differs in quality
There is also a difference between the quality of different yeast products. A non-standardized yeast is typically exposed to relatively large variations in the composition and amount of various selenium compounds. This also means that the absorbability of the selenium yeast can vary a lot. The yeast products with the best properties have pharmaceutical-grade quality with very tiny deviations in the composition and amount of different selenium compounds. Most importantly, these deviations are guaranteed to be within very narrow and predefined limits. 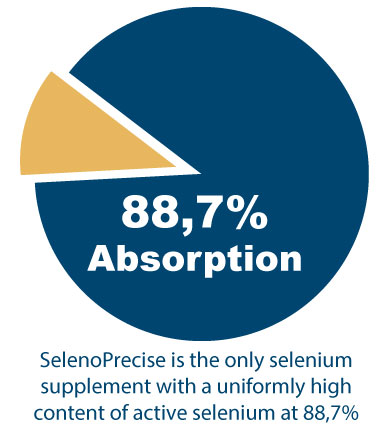 SelenoPrecise Eurotabs is one of the most well-substantiated selenium preparations when it comes to scientific documentation for stability, safety, and absorption.
More than 40 published science studies serve as documentation for the quality, stable selenium content, high level of bio-availability, and safety of SelenoPrecise. It is considered to be the selenium yeast that has the best documentation, and that is why SelenoPrecise is often chosen by researchers for scientific studies and research projects worldwide.
Many people take selenium supplements on a daily basis but are not necessarily aware of the large quality and bioavailability differences from one product to another.
You can try testing your current selenium tablet against SelenoPrecise in the table below and see how well it performs.

Also available in a 200 μg edition.